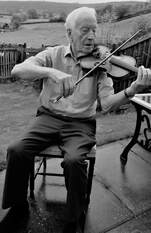 Tony O'Donnell
The story of a Child Prodigy
Tony O'Donnell was born on 27th February 1935 in the remote Donegal village of Brockagh. Tony spent his exceptionally happy childhood with his two older brothers and three younger sisters. Together they were free to roam the vast farm of land that their father Hugh and mother Madge owned. The beauty and tranquillity of Tony's childhood surroundings provide for him everlasting memories of freedom and happiness.
Tony was only a very young boy when one of the neighbouring Doherty brothers visited his house in Brockagh. He brought with him a ‘Tin Fiddle’ and although money was very scarce Tony's mother, Madge, paid 3 shillings for it. The fiddle was first given to the oldest of the O'Donnell brothers Daniel, but it was established quite quickly that Daniel's real love was not violins but for bulldozers (later in his adult life Dan was referred to in Irish folk songs as ‘Dozer Dan’). After a brief period with the next oldest brother Hugo, the tin fiddle eventually ended up in the very grateful arms of 8-year-old Tony.
Almost immediately it was noticed that Tony had a natural flair for the violin. A very famous Irish folk violinist by the name of John Doherty visited Tony's house in Brockagh and described Tony as having "a very special talent". John agreed to give Tony lessons. These were oral tuition lessons only and did not involve reading music. Tony attended the lessons with John Doherty until the age of ten, at which point he was known to be a ‘child prodigy’ on the instrument. It was decided that for Tony to make further progress it was necessary for him to read music and so at the age of 12 he attended lessons with a music teacher in nearby Ballynofey by the name of Paddy McCafferty.
At the age of only 13 years old Paddy McCafferty entered Tony into an Irish Ceilidh Fiddle competition in Letterkenny for under eighteen-year olds. Young players attended the competition from all over Ireland. The brilliant young talent, Tony, won the first prize and for doing so his very proud mother Madge received a cheque for fifteen shillings which in those days was a large sum of money. Out of the winnings Madge bought Tony his very first football.
Under the tuition of Paddy McCafferty Tony continued to develop as a musician and at the age of sixteen was encouraged to take up the popular instrument of the day which was the saxophone. It was not long before Tony also mastered the saxophone and then the clarinet as well. He was known in the area in which he lived for being a special musician who had the ability to play all of the big saxophone and clarinet solos of the Big Band era.
It was at the age of twenty-one (1956) when Tony had the opportunity to travel to America, He was sponsored by an uncle who lived in Bethlehem, Pennsylvania. Tony had great success in America playing Big Band music in Atlantic City for consecutive seasons. However, he was never truly happy in America and so in Christmas 1959 Tony returned to his beloved Brockagh and was reunited once again with his family.
In 1961 Tony travelled to Scotland where he played and toured in several show bands. It was here in 1961 where he met his beloved wife Mary. Tony and Mary were married and together they had two children, Sean and Anthony. After great success in Scotland Tony decided to settle down in the English sea-side town of Redcar. The years spent in Redcar were very happy for Tony and his family. Tony continued to play music (and had great success) all around the North East of England in a local band by the name of Contrast.
It was whilst in Redcar that Tony also became a peripatetic music teacher at schools in nearby Yarm and Norton. Several of the students who he taught made it to the finals of the ‘Young Musician of the Year’ competition. Tony proved to be as good at teaching instruments as he was at playing them and over the years many young people benefited from this experience and expertise.
Later in life Tony and his wonderful wife Mary, who he loved dearly, moved to the Esk Valley in the North Yorkshire Moors, where they enjoyed a very happy retirement. At the age of eighty-five Tony continues to play ‘Wicked Fiddle’ at local venues. Many people continue to be mesmerised by the special talent he possesses.
Tony often reflects upon his long and wonderful life of music and that, from a very young age, he was able to use the talents which God provided for him to bring the joy of music to so many.