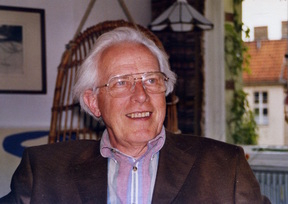 Christof-Andreas Lindenberg was born 20th August 1932 in Berlin. He grew up in Munich during the Nazi era with anthroposophical parents who opposed the regime. His father, a priest in the Christian Community, had a doctorate in Music, and Christof-Andreas enjoyed a very musical upbringing, learning all the basics in a somewhat playful manner.

Christof-Andreas began composing in early childhood and intended to study music. However, after leaving school, it was suggested he should study curative education with Dr. Karl  König. This became his life's vocation, within the Camphill Community. There he is composing and playing the lyre. Initially courses with the late Prof. H Progner (Munich), E. Pracht (Arlesheim) and Dr. H. H. Eugel (Glencraig, Northern Ireland) supplemented the special pedagogical training, and he became a music therapist and instructor and co-founder in the Independent Music School in Europe.

In 2001 he and his wife Norma, with two colleagues, founded the Dorian School of Music Therapy in North America, still lecturing as well in Europe.