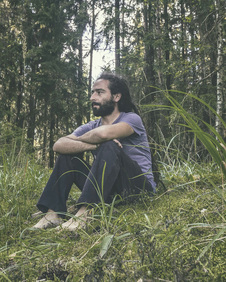 Luis Pato
Luis Pato is a classical music composer and educator from Porto, Portugal, currently living in Augsburg in Germany.

Born in 1981, despite showing a very early interest in Music, Luis Pato started his musical studies at 15 years of age. First he studied music theory, classical guitar and ensemble music, at “Conservatório de Música da Maia” and then he studied Musical Education at the Jean Piaget Institute of Education in Gaia, Portugal.

The composer has played in several ensembles, including the “Guitar Quartet” from CMM, the “Jazz Trio” from CMM, CMM’s “Orff Orchestra”, the choir “Rerum Novarum” and the “International Mantra Choir” of the yoga school in Porto (known as the International Yoga University, IYU).
After teaching for several years, Luis Pato moved to Finland, where he continued his musical studies with teachers from Finland and Russia. During this time he wrote many pieces both for solo instrument and ensembles, as well as participated in multi-artistic projects and performances. His works have been performed in Portugal, Finland, France, Ireland, Germany, America and Russia.

Most notably, Luis Pato has worked with the OPGB (Portuguese Mandolin and Guitar Orchestra), for whom he wrote “Pleiades”, the opening piece of OPGB’s debut CD.

His music is influenced by dreams and imaginary worlds, by mythological tales and nature, and has often a quiet and contemplative mood. Folk music has had also a big influence in shaping the way Luis Pato sees music and musical structure. For him playing and composing is a way to express complex feelings and ideas, for which words are not enough.
​
To contact Luis, email: luis_bento@hotmail.com