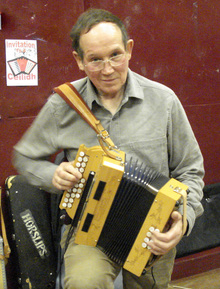 Adrian Hopley
On 1977, the Queen's Jubilee, I was sitting at home with a 'pot' on my leg in Winster, Derbyshire. Two village ladies appeared at the door, thrust an ancient, leaky melodeon into my hands with the words "If you can learn to play the Winster Gallop, we will dance it at the celebrations." I did, and they danced. This led to the resurrection of the long defunct Winster Morris with me as their musician. However, the melodeon was in a bad way, so I bought a new one, and never looked back. Four years later, and now living on the North York Moors, I joined the Broadgate Ceilidh Band at the behest of the local Bobby. On his departure, it became the Widdershins which has played in North Yorkshire and the North East for thirty years.

The Widdershins Band has been a great experience, and has prompted the writing of a number of dance and interval tunes, some of which appear in this volume. Most are for the G/D melodeon, though I find the sound of the old C/F Hohners very pleasing and more appropriate for some tunes. You can take your pick. Titles reflect the area in which I live. The tunes can be adapted and modified, and I would encourage you to do so. I rarely play them the same way twice. Anyway – I keep forgetting them.
​
Have fun.