Upper esk music
Andrew Dyer runs Upper Esk Music, which publishes his own music as well as music composed or arranged by others.
It is based in Castleton, a village on the North Yorks Moors.
Upper Esk Music is a member of the Music Publishers Association. 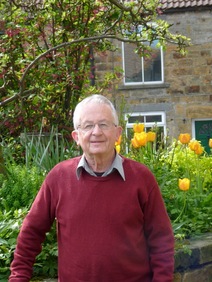 Andrew was born to musical parents. He began playing the piano when he was six years old, later learning the organ, double bass, timpani and percussion. He began composing music whilst at university, with music for two college plays. He is a passionate believer that ‘music is for all’, and that music is a great force for good in the building of social communities.

Music has always played a major part in his long experience working with adults and young people of all ages. He has also worked as a church organist, conductor, percussionist and jazz player. Andrew’s 37 years’ teaching experience with responsibility for music in schools enabled him to gain expertise in writing and arranging music for young people across the full primary and secondary age range, from classroom music to choir, orchestra, jazz band and wind band. In his local community he has formed and conducted a local choir and was the bandleader of a successful local 12-piece jazz band for over 20 years, for which he also wrote a number of pieces.
"Over my many years of experience I have not only composed and arranged music myself, but also come into contact with a number of other musicians who have done the same. All too often our music then just sits on a shelf and collects dust. Upper Esk Music tries to play a part in remedying this sad waste."

Andrew Dyer, Barbara Anderson and David Chapman
The History
The original idea came from a conversation I had in 2004 with my  friend and fellow musician Dave Chapman where we discussed the idea of setting up a music publishing company. Our aim was to put out there and share the compositions and arrangements that we already had, and produce more new music. This would not just be for our own works, but for those of others with whom we came into contact. We saw it as a local community affair, with the business side there as a necessity but not to be the exclusive factor in what we would do. All this lay fallow until 2011 when I was on tour with the Eurythmy Association of Great Britain and Ireland. There were four pieces of music involved in the programme, of which I had been commissioned to write two and another colleague one.  (The fourth piece was composed 100 years previously). I realised that there could well be some considerable interest in making the newly composed pieces available, and this became the spark that renewed my interest in publishing music.

We then, together with Barbara Anderson – another fine local musician, formed an umbrella group (Upper Esk Music Projects) within which we were each to operate as separate entities, whilst offering each other mutual support. We still work together in many ways, but Upper Esk Music has now emerged as the one company.

The Publications
The music is printed by Camphill Press at Botton Village in the North Yorks Moors. Botton Village is a Camphill Village, which incorporates a working intentional community supporting adults with special needs.

The standard of printing is very high, on high quality paper with top quality covers. Most of the covers use pictures by artists Pauline Brown and Janet Lynn or photographs by local photographer Phil Brown.

The volumes are a good size for performing musicians – slightly larger than A4 (21.8 x 30.3 cm). Volumes of choral music are printed at A4, this being more manageable when being held.

Music for Instrumental Ensembles is produced both as sets of complete scores and a set of parts, with further copies of each also available separately.

Multiple copies of choral music are available at a reduced rate.
Proudly powered by Weebly