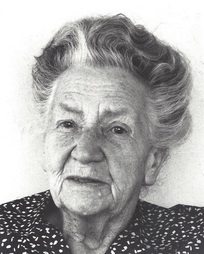 Marja Slotemaker de Bruine was born in Holland in 1898. She was a clergyman’s wife for 25 years and spent many of those years living in Indonesia with her husband. She grew up in a very musical family and she was a very good pianist. Her knowledge of and interest in modern music was phenomenal. She was also always up to date with the latest literature. Her marriage broke up when she was in her fifties and then she became more and more involved with anthroposophy and music therapy. She met Dr Hans Heinrich Engel when she was doing some music in Camphill Christophorus in Holland and she became part of the research group around him in relation to music therapy. She worked together with Hans Heinrich in Glencraig in the therapeutic work, but also began to work on her own ever more.

Marja spent some time as a coworker in Franz Löffler’s home for boys, but she never became a curative educator as such. During that time Marja worked for a time with Annie von Lange and had singing lessons with Maria Führmann. The planetary scales were very close to her heart and she composed many pieces for various instruments in these scales, including the music for passion week, ‘Charwoche’ for 2 voices and instruments, which was performed very regularly in Glencraig for many years.

Marja had trouble with her knees for a long time and was in a wheelchair when she met Hans Heinrich. He prescribed injections for her, but because her own doctor in Holland refused to give them to her, Hans Heinrich invited her to come and live in Glencraig. Very soon after this she could walk again and did so until the end of her life!

Marja was a devoted and enthusiastic composer and would write music for any combination of instruments for all possible occasions. She left a large collection of manuscripts into my care at her death in 1990. She still composed until in her late eighties.

(Edeline is the Executor of Marja's will, and undertook the task of preparing her music for publication. She worked closely and tirelessly with Upper Esk Music to make this possible.)