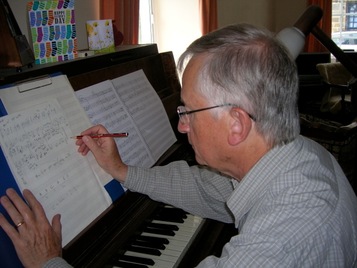 Andrew Dyer runs Upper Esk Music, which publishes his own music as well as music composed or arranged by others.

Andrew was born to musical parents. He began playing the piano when he was six years old, later learning the organ, double bass, timpani and percussion. He began composing music whilst at university, with music for two college plays. He is a passionate believer that ‘music is for all’, and that music is a great force for good in the building of social communities.

Music has always played a major part in his long experience working with adults and young people of all ages. He has also worked as a church organist, conductor, percussionist and jazz player. Andrew’s 37 years’ teaching experience with responsibility for music in schools enabled him to gain expertise in writing and arranging music for young people across the full primary and secondary age range, from classroom music to choir, orchestra, jazz band and wind band. In his local community he formed and conducted a local choir and was the bandleader of a successful local 12-piece jazz band for over 20 years, for which he wrote and arranged a number of pieces.

Over the past twenty years he has also played the piano for the movement form of Eurythmy, working in Botton Village Camphill Community and with the Eurythmy Association of Great Britain and Ireland, for which he completed two tours in the UK and Europe with music which included his own compositions.