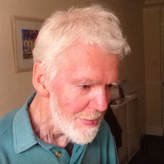 Colin Tanser
Colin Tanser was born on January 5th1943, five days later than me! Throughout his life he has sustained a deep love for music which manifested in many diverse directions, and we were most fortunate in that we could often work together artistically, recognising that this was an important part of our life together.
His first instrument was piano, then the organ. He played flute, all the recorders, French horn, tuba, accordion, banjo, double bass, classical guitar, harp, also the lyre which he was always enthusiastic to promote.
He studied music in college, then taught in schools, becoming Head of Department. He played all kinds of music in the ‘O.K. Band’ in Sheffield and played music for stage performances, helping children in his class in the Steiner School to make and play their own pipes.
In Stroud he taught private lessons in several instruments and took a class in Cotswold Chine School where he began to work therapeutically with music based on the ‘Image of Man’ in accordance with anthroposophical principles. This was developed further in the Camphill schools for pupils with special needs and he pioneered a three-year training course in music therapy for students of Curative Education.
Colin was very involved with colour-light therapy for which he played the lyre, working with the planetary scales and the tone for the day. He also created songs for the festivals of the year and for various events and occasions and these have been sung in many different countries.
His lyre music has been very much appreciated and admired. It has been played all over the world, including a work commissioned for the international lyre concert in Belfast in 2006, played by two hundred lyres. This piece, ‘Everyman’, included a children’s choir and hand bells.
Colin has inspired many people through his modest nature and his love of music.